Columbia is a Goddess who is understood differently by those of us who honor Her. I don’t believe we all need the same understanding of the Gods, because They reveal Themselves differently to all of us.  My journey with Columbia began when I was a child, as so many of my Divine relationships did.

I recognized Her Divinity before all Others who would eventually enter my life, however, I had no context for my desire to honor Her.  She walked with me everywhere, in all of my endeavors.  I shared a part of myself with Her that I didn’t understand could be given to another. She was/is my first Goddess, and now that I am older, now that I have unlocked the secrets of my spiritual Ancestral history, I know why.

She manifests in this physical realm as, and answers to the name of, Columbia, Goddess of Freedom, Patroness of the United States.  In this aspect, She is young and bold and driven to right the wrongs of injustice done in Her name by those who recognized Her in these lands. But She was not brought here.  She was here already, waiting to be seen and loved by those who would be Hers.

Though She is young in this manifestation, Her soul is far older than Her form in this realm.  My understanding of Her includes an aspect that is honored among my dragon subjects, as the Champion of Freedom in our home realm.  She is our Divine Patroness, and through Her worship, we ensure Her favour and Her assistance in times of social strife.  In this aspect, She is called the White Dove, because that is the form She took to manifest to our Ancestors.

For Columbia, I am forever grateful.  Every day She teaches me that freedom must be fought for, that it can not be granted by the elites in power.  I am grateful for Her tenacity, and for Her drive to become better than She was in previous generations.  I am grateful for the White Dove, for the legacy that She left for my people, and for the responsibilities She has entrusted to me.  I am Queen of my people only because of Her, and I am humbled to have been chosen to continue Her work on their behalf.

Lovely Persephone, ruling over the hosts of Hades
You bring solace, both above and below
Assuaging the barrenness of Winter, Death and Time

Indomitable Rhea, in the face of all adversity You smile
For You are the Lioness, whose prowess is known
In the hearts of those who labor on

Well-loved Columbia, Lady of sweet freedom
Whose strong arms enfold us in warmth
Glad are we by Your presence
And in Your absence left cold

Wild Artemis, running along rivers
Protectress and Huntress of beasts
We honor Your fierce glory
And stand awed by the might of Your Bow

Indelible Ariadne, Lover of Madness, Speaker of Truth
Your lessons are those we find within us
Of Will, and Wisdom, and love’s fickle moods

All-encompassing Gaea, O vastness of Earth
Who is at once Mother and Grandmother
Eternal Creatrix, we praise You
And embrace You at our end

Luminous Hekate, Light at the Crossroads
Tending the unwelcome spirits
Even these have purpose among Your retinue
As we hail them in passing

Compassionate Athena, Lady favoring strategy over brute force
We are the wheels You set in motion
And by our hands is the Divine Work done

Warlike Aphrodite, bane of hearts and Mistress of cruel Ares
You tempt even the strongest of mortals
And Yours is the triumph of procreation

Beloved Hestia, consumed in the flame of enlightenment
Yours is the way of the Unfettered Self
We are but fleeting in the face of Your truth

Illustrious Hera, Queen of Gods, tester of men
Your trials forge character and train resolve
For ego falls away, as Your gaze falls upon us

Resplendent Leto, She of Untamed Spirit
Woe be upon the boasters and fakers
Who with scornful tongues
Will know the peace of Your Offspring

Bountiful Demeter, by whose power Earth’s sustenance is grown
Thank you for the greatest bounty of all
Your Daughter, the Blossom of Spring

Blessed are the Goddesses!  Hail the Magnificent Thirteen!

Now, I don’t know about anyone else, and I can only speak for myself, but when I refer to America’s Goddess as Columbia, it is not because I decided to name Her that. It is because that is the name She introduced Herself as, because that is Her name.  Also, about Her bearing Columbus’ name…  Well I guess you could say that, but am I the only one to speculate that She used him to spread Her own name more conveniently?

If we look at her aspects and correspondences, for instance, Columbia as the Peace-bringer, and Her association with the dove (a symbol of peace), which in Latin is called Columba, we can see just how easily She usurped the right to name this country. The United States of America is Columbia. I am not condoning the activities of Columbus or those like him, but let us also realize that Columbus may not have even been his real name.

His name was Cristobal Colon, if he was a Spaniard, or it was Cristoforo Colombo, if he was Italian. His origins are widely debated, and it is also speculated that he may have adopted the surname Colon/Colombo/Columbus in order to mask his true identity. With all this in mind, it seems fairly reasonable to believe he may have simply been a tool of a Goddess who knew exactly what She wanted.

There is also no getting around the fact that this country, under Her auspices, has done truly terrible things, though my impressions of Columbia Herself lead me to believe She is a young Goddess, and who among the Gods did not make any terrible or tragic mistakes in Their youth? Again, I am not attempting to minimize the damage that was done (and still being done– but conversely, a lot of good is also done) in Her name, but if you were a young God or Goddess, wanting to be recognized, would you turn your nose up at the people who saw and recognized you? Or, would you embrace them, and attempt to help them achieve their goals, at least until you understood the wrong being done?

When I started this blog, I knew that revealing myself as a devotee of Columbia would raise eyebrows.  But did I allow that apprehension to overpower me?  No, because I could not have lived with myself if I’d done so. I was born in the District of Columbia.  My name, Columbine, is a gift directly from Her. The columbine flower is the State flower of the place which nourished me and my budding spirituality, and will always be my home. She is the Patroness of the State in which I now reside, with a statue placed atop the Capital building since before Texas was a State.  My entire life has been guided subtly by Her.  I will not deny Her rightful place in my heart, or deny Her honor in my house.  And I will always, always call Her Columbia, because Libertas is a different Divine Entity.

Libertas is of Rome.  Columbia is truly and completely a Personage of this continent, and She was already here when the first European settlers stepped foot onto this land.  She simply wasn’t yet recognized, as was illustrated in the famous poem “Freedom Triumphant in War and Peace”, by James Russell Lowell:

“…Our fathers found her in the woods
Where Nature meditates and broods,
The seeds of unexampled things
Which Time to consummation brings
Through life and death and man’s unstable moods;
They met her here, not recognized,
A sylvan huntress clothed in furs,
To whose chaste wants her bow sufficed,
Nor dreamed what destinies were hers…”

What destinies, indeed.  She is not perfect, but I do not believe any of the Gods and Goddesses are perfect.  Nor are the humans who love Them perfect. We all do what we can to better ourselves, our lives, and hopefully, if we are compassionate, we strive to better the lives of those sharing this world with us.  But compassion is a lesson learned only through time, trial and error.

Columbia has had trials, and errors, but precious little time yet for Her to be seen by some as anything other than an imperialist trope.  I will continue to love and honor Her in the meantime, because through our actions, as well as our words, do we succeed in changing the world.  And change will always be the drumbeat to which She marches.

Our Star, shining and multiplying the light as it passes through You.  Queen of Diamonds, forged under the pressure of free will.  Risk-Maiden, stacking the hands of those whose guile is limitless, yet are You also the Bear consuming the meat of Your weak and crippled prey.  You are a fickle Mistress, though the Powers You govern are steady, even in the chaos of the Marketplace.

Hail, Lady of Rushing Bulls, Who tramples over false currency– that which does not feed the soul, or the stomach.  You entreat us to be true, and to welcome the gains which we have earned, and to never sign away our Sovereign right to be secure in our own deeds.

Columbia, You were the Nameless Goddess Who was here before us, waiting to inspire this Nation.  We did not understand the depth of Your lessons, and only now are some awakening to the debt we owe this Land of Your Jurisdiction, and the many Nations which preceded ours– still living, still struggling to be free.

My Lady, always fighting for the cause of Liberty, Your presence was known in small ways during harrowing times, and even when the shackles were slipped again over the wrists of free men and women, You did not fall silent, but raised Your mighty voice, until a chorus was sung in pursuit of the promise of self-governance.

Yet the road remains perilous, nor easily walked by those unwilling to risk their very lives. For to stand beside you in ease, Risk-Maiden, is to stand secure in the knowledge that Freedom can, and often will, be taken to the grave.

These Adorations were put together using various poems honoring the goddess, as well as my own UPG concerning Her.  Numerical significance: 5+8=13… the number of Her original Colonies.  Hail Columbia!  [Also, to give credit where credit is due…  This post by Sannion started it all.] 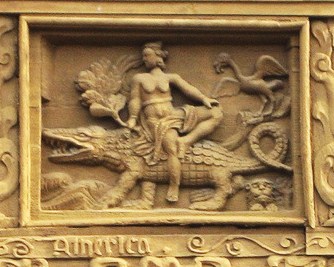